Where You Live Affects Your Taxes

Ronald A. Brown and I both started our professional fundraising careers in 1979, where we worked together at the United Way of Broome County in upstate New York.

I subsequently worked my way through the Jewish Federation and Foundation system. Ron made a name for himself through charitable gift planning programs at Princeton, Columbia, Fordham University, United Way of America, and the National Wildlife Federation. Last Fall, my former colleague wrote a book about the profession of charitable gift planning. Despite its formidable title, A History of Charitable Gift Planning: How Gift Annuities Shaped American Philanthropy (1830-1959) it is readable, fascinating, and groundbreaking.

Ron writes that the profession of charitable gift planning began when actuarial science was introduced into fundraising—and he even pins it down to an exact date in 1929. But his story about American gift planning goes back to 1831. He gives credit to a great American artist, John Trumball, for creating the art of planned giving with a paint brush.

If you know the name John Trumbull, you may recall that he was a famous Revolutionary War artist whose work included “The Declaration of Independence” and “Battle of Bunker’s Hill.” After creating four large paintings for the Capitol Rotunda, he failed to secure commissions for four more, and his fortunes began to decline.

Widowed and alone at age 75, he had an apartment full of unsold paintings and no income. In his Reminiscences, Trumball talks about being forced to sell furniture and dishes to survive. But out of this necessity was born a modern invention. Indeed, Trumbull made financial history when he offered to give a number of his paintings to Yale University if they would in turn pay him a suitable income ($1,000 per year) for the remainder of his life. In so doing, he became the first donor to ever use a charitable gift annuity to finance his retirement. Benjamin Silliman, a Yale professor, brokered Trumbull’s gift and in the process created the nation’s first collegiate art museum.

From this humble beginning, the gift annuity has evolved into the workhorse of philanthropy, benefiting both donors and charities, and giving individuals of diverse means the opportunity to leave a charitable legacy.

Over the years I have written many times in this column about how gift annuities work, and I have examined the many ways donors can use them to make a gift and provide income, with assurances of safety and professionalism. Actually, it wasn’t until 1925 that New York State enacted the first laws recognizing the legal validity of charitable gift annuity contracts, but, as Ron Brown details in his book, nonprofits issued many thousands of annuities in the 19th and early 20th centuries in the absence of statutory authority.

Brown’s book explores the evolution of a national system that now supplies billions of dollars for charitable service, and he also describes how American donors fell in love with gift annuities in the 1920s, giving primary credit to an international campaign by the American Bible Society that produced 4,615 gift annuity contracts between 1919-1930. During that period, many nonprofit organizations leaped into issuing annuities, often without adequate financial safeguards. Not until 1927 was a national risk-management system proposed at a conference on gift annuities. Actuarial principles for charitable gifts were adopted that that we now take for granted, including statistical measurement of average annuitant longevity; calculating payment rates by targeting a charitable residuum; and valuing charitable and beneficiary interests using financial projections grounded in investment experience.

In a nutshell, that’s the revolutionary story of how charitable gift annuities and the profession of charitable gift planning were born. My former colleague, Ron Brown, tells the rest of the story quite artfully.

Call me at 614-338-2365 with no obligation for more information on how a charitable gift annuity might serve your income needs and charitable interests. 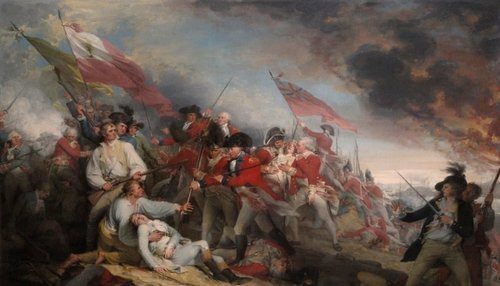 This painting of the Battle of Bunker Hill was one of more than 70 paintings given to Yale by the artist John Trumbull in 1831 in exchange for a life annuity.