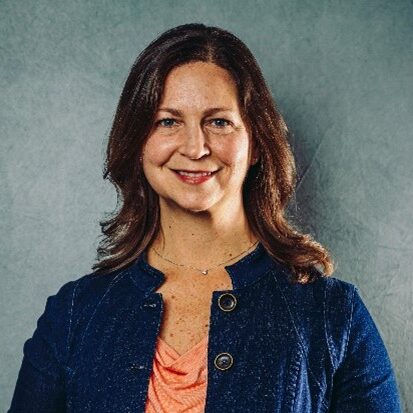 Aimee grew up in Reynoldsburg, Ohio and stayed in the area to attend The Ohio State University (Go Bucks!). There she completed her Bachelor of Science in Family Relations & Human Development, Master of Public Health, and Medical Degree. During this time, she married her high school sweetheart, Josh, at Temple Israel in Columbus. After completing an Internal Medicine Residency with a focus on women’s health and serving as Chief Medical Resident at the University of Pittsburgh Medical Center, Aimee settled her family in Granville, Ohio. She works remotely for the U.S. Department of Veterans Affairs, Office of Women’s Health as a Physician-Educator in addition to providing direct patient care to Veterans at the Chalmers P. Wylie Ambulatory Care Center in Columbus.

Aimee has been an active member of Temple Israel for >20 years, teaching in its Religious School and serving on its Board of Trustees and Education Committee. She has also found time to give back to her local town by being a member of the Granville Education Foundation, including as President. She has read nearly all of the books from PJ Library (when her kids were young), loves to host Passover, can’t wait to return to Israel and has made it a priority to ensure her daughters, Abby and Evie, have as strong of a Jewish identity as she does herself. Abby and Evie are longtime campers at Goldman Union Camp Institute, have benefitted from Temple Israel’s Religious School, enjoyed becoming Bat Mitzvahs, and remain involved with NFTY. Abby also had the experience of a lifetime at URJ’s Heller High School in Israel during her junior year.