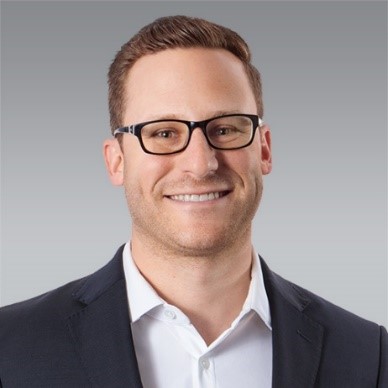 Michael Schottenstein is an attorney with the firm Kegler, Brown, Hill + Ritter, specializing in commercial real estate transactions, leasing, financing and deal structuring. He’s been selected as a Rising Star by Super Lawyers yearly since 2017 and has also been recognized as one of the 18 Difference Makers in Central Ohio by the Columbus Jewish News (2019) and as a JewishColumbus 12 Torches Award Recipient (2018). Michael currently serves on the Board of Trustees of the Columbus Jewish Community Center, The Ohio State University Hillel and JewishColumbus. He also serves as the Chair of the Board of Young JewishColumbus and is a member of the inaugural class of the Leadership JewishColumbus. Michael received his undergraduate degree from Syracuse University and his law degree from the Moritz College of Law at The Ohio State University. He was born and raised in Bexley, Ohio, where he now lives with his wife, step-daughter and their two cats and two dogs.